My Career: The Dunning-Kruger Effect and Impostor Syndrome

My personal journey into my programming career and how it relates to impostor syndrome and the Dunning-Kruger effect.

My development career started at the age of 16 when I joined Viva IT as an apprentice developer, you can read more about my thoughts on my early career here (Three months with Viva IT | Kane). Fast-forward to 2020, and with 4 years of experience under my belt I believe that now is the time to look back and review my journey, hopefully providing some useful insight for others travelling the same path as me.

I've broken this post down into the five sections which I deem to be the important steps towards competence in our profession, in order to help you to understand where you are in your career and help me to reflect on mine. In each of these sections I've provided some of the techniques which I have found valuable to my progression, as well as some anecdotes my company and I have acquired along the way.

No confidence without competence

All of us will know this feeling, that fear that we don't know what we don't yet know but also the excitement about all of the new experiences ahead. I recall my first day at Viva IT and the apprehension which I felt while looking at a peer's IDE, though I also distinctly remember the excitement that I felt at the sheer depth and breadth of knowledge I could acquire. Before starting at Viva IT I only had a small amount of experience with programming, most of which I had taught myself at home, so didn't really understand what software development entailed. It was at this point that 'no confidence without competence' best suited my situation, but I was fortunate enough to be well supported throughout as Viva IT helped to inspire confidence by not dropping me in the deep-end and keeping me excited about my future career prospects. Eventually with the right support and encouragement you will start to grow.

Becoming confident without any competence

As the core concepts start to settle in, you begin to grow in confidence as a result of of your initial fears and anxieties having been proven to be unfounded, hence leading to an exponential increase in confidence which is matched with only a small increase in competence. ("Wow I've achieved so much, I never thought I could do this."). The danger here however is that there are still many advanced concepts that you don't yet understand but are currently unaware of. I remember being here and becoming heartily sick of pair-programming learning; I just wanted to begin putting my newly learnt skills into action. In retrospect, I now understand how important this pair-programming was as many more naive mistakes would have been made without such a solid understanding of the fundamental concepts. If I had been allowed at this point to work independently, I believe that my newfound confidence would have been shattered and I would have been uninspired before I had acquired enough experience. In this instance a company must perform a delicate balancing act by endeavoring to inspire their employee's confidence, whilst being careful to not allow it to get the better of them.

Being confident, but not still not competent

Here I am at the peak of my confidence: https://twitter.com/PHPem/status/802464644442902529 only a year into my career speaking at an un-conference about what I wish I'd known 12 months ago. This time was characterised by many large mistakes (although less that there would've been earlier on) which resulted in lots of damage to production uptime, though in hindsight the greatest issue I faced at this time was gaining the appropriate interpersonal "soft-skills" in order to effectively work in a team environment.

This is where I believe that the Dunning-Kruger Effect is most applicable as your newfound confidence leads to a perceived level of competence which actually far exceeds your current skill level. Moreover, you will be less receptive to feedback and criticism thus creating a vicious cycle which is sometimes difficult to break out of. Here I believe that the stress of making mistakes early on is a cruel but necessary lesson to learn while trying to progress. At this point the company's role is to be blunt and honest when it comes to recognising these mistakes. This will therefore hasten the employee to realise their bias, even if they are not receptive at first.

Not being confident, but becoming competent (Impostor Syndrome) 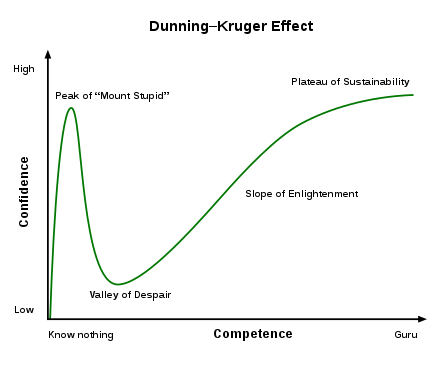 This area is annotated on the above graphic as the "Valley of Despair. For me I would've definitely described this time in my career as a "Valley of Despair"; the understanding that my skills weren't as good as previously imagined mixed with the mistakes I was constantly making caused a steep decline in my confidence. These thoughts and feelings are also commonly referred to as "Impostor syndrome".

It's very important to fight your Impostor syndrome early on as it can be a huge barrier to career progression, an can prevent you from becoming an effective trainer or manager. You can understand this while empathising from the trainee's point of view. Imagine seeing a person you deemed to be better at your job than you are, maybe somebody you look up to, yet this role-model believes that they have no ability and ultimately projects their insecurities onto you. How would you feel? Any trainee would have no confidence in their abilities and would never have the opportunity to build it. As an inadvertent result their growth as well as your own would be slowed.

It turns out that becoming confident has been the hardest part about my career so far; for me it's a constant mental battle. The best weapon I have in this battle is the self-reflection which I perform after a bad day in order to allow me to to think about my personal achievements over an extended time frame rather than focusing on small mistakes of the day. Additionally, the opportunities which VIVA IT has provided for me to grow and develop have also been a huge confidence booster for me, for example by allowing me to help with staff training and to write posts like this one. Having a platform to demonstrate my inter personal skills has also proven a highly effective way of improving my self-belief.

I believe that if at the time I had been equipped with the knowledge of the Dunning-Kruger Effect and Impostor syndrome I wouldn't have fallen into these traps as easily, or at least I wouldn't have been confused for as long.

Look back over the different sections of this post, where do you think you are currently in your career?

As a software engineer at Viva IT, his role at the company is to learn and create quality, well-tested software.