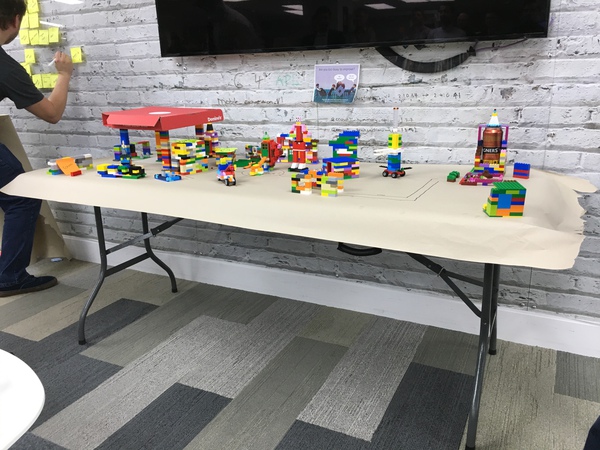 It was on a recommendation that I attended Agile Nottingham’s Return of the Lego Simulation in Nottingham. People who had been to the first event raved about how clever and informative it was.

The event was ran to teach its attendees the principles of scrum, an agile software methodology which we adhere to here at Viva IT. Here though, we wouldn’t be writing software, we’d be creating things out of lego, and the sprints wouldn’t be a week or a fortnight long, they’d be seven minutes each.

Before we started on the sprints, we gathered a list of features from the product owner and assigned them a score based on how long it was estimated each would take to produce. These were then divided out amongst the teams.

Our first sprint was spent making the finest types of buildings and features we could imagine. It was only towards the end of the sprint that we realised our work wasn’t going to produce anything in this timeframe, defying the agile principle of releasing early and often often.

By the end of it, there was very little done. A feature is not finished unless the product owner has approved it and it can be seen on the table. This equates to getting software approved, deployed and released.

After that we had our retro, discussing important points about the sprint just gone. Some of the points questioned the availability of the product owner, with so many teams it became a block for others waiting for clarification on the technicalities of their features.

Things were then shaken up, with the selected members of each team being given a specific brief to essentially become mini-product owners. This sped up the process, but also introduced conflict where some product owners might have different expectations.

Towards the end of the session, everyone was clear on what it was that needed doing, and what it was that they were doing. The table was filling up with lego structures that met the requirements of the chief product owner.

As an experience it was an eye opening one, teaching me to ask questions at every stage and never assume, to ship things frequently and not to over-focus on one specific task, to be assertive and know exactly what it is that needs doing and how to do it, but most of of all how a team of many can unite to achieve the product that the owner needs.

Having built his first website for his family in 2004 using Notepad and learning C-like syntax to make Doom levels, his passion for all things software has grown with time as consumer technologies have boomed.

Three months with Viva IT | Kane A Week of Work Experience